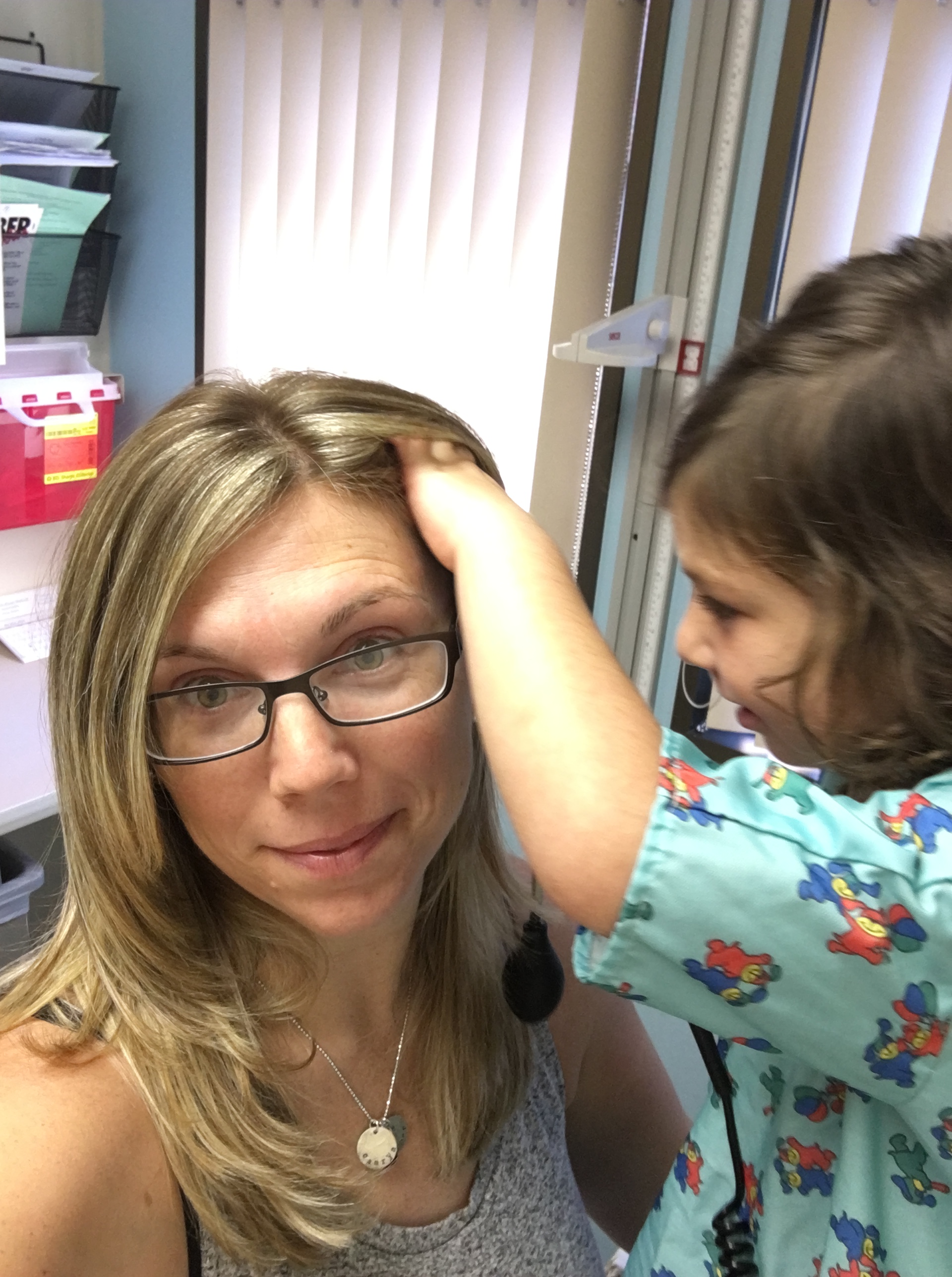 Do you know what can knock you down so quickly as a parent? For me, it is a trip to our pediatrician for a routine physical. One would think that by getting them there to make sure that they are healthy and are vaccinated is enough. But no, the judging factor by a pediatrician is unreal. I know that I am not the only one who feels this way about their pediatrician because I hear that it happens all of the time. Now don’t get me wrong, I like our pediatrician. She is extremely knowledgeable and is great with my kids. So why on earth do I leave there feeling like an inadequate parent?

Today I had Camryn’s one month checkup and then a well-visit for my four year old. I thought I was a genius in scheduling two appointments back to back because it would be easier to just get them over with on the same day. While sitting in the room waiting for our doctor to come in, I was wondering what I was thinking. In that moment, I blamed it on the postpartum baby brain and added in some kind words from my inner voice that said ‘hey Korrinn, way to go asshole. Let’s file this in the NEVER do this again category you mother of two amateur’.

Harper was first on the chopping block and everything was going well. She nailed her eye test and her ‘show me how well you can walk to the door and turn around’ exam. Next up was the routine check of weight, height, eyes, and ears. This part of the physical never bothers me. It is what happens directly after that gets to me. Now we move on to the part of how your kid sizes up (quite literally) in percentiles.  Great, we are already comparing our children to what “normal” should be and look like. Why are we talking about BMI’s with a four year old? She is “overweight” by three pounds. Three stupid pounds. Her doctor then says that she is really muscular, strong, and built wider and that she isn’t too worried. Then she stares at me for a moment. Yes, Dr. McJudgington, you are correct in your assumption that she has my body type. No wonder why individuals have issues with body image. We introduce it at such an early age. Now that we have that all squared away, here come the questions because I can’t just say that she is three pounds heavier than the average child and expect that to be it now can I?

Basically it is a full blown interrogation at this point about my child and my child’s daily routines.  I would imagine it being very different from a real interrogation since you don’t have a bat shit crazy preschooler who would like to do her own damn thing (like touch every medical instrument, ask to use gloves every four seconds, and of course ask to borrow the stethoscope so she can play doctor while your ass is in the hot seat) since she was just poked and prodded for a solid half hour. In between you reminding your child to ‘stop touching the medical equipment’ or to ‘not touch the bio-hazard container filled with fucking sharps’ you are expected to carefully answer the barrage of questions being launched at you.  Because if you answer in any sort of way that isn’t the norm or that she doesn’t like, you are judged. Most times it isn’t silent judgment either. Questions like; how many fruits and vegetables is your daughter eating per day? How is her appetite? Are you solely breastfeeding the baby or supplementing? What does she do for activities and exercise? How long does she sleep at night for? Have you gone to the dentist? Can she share? How is she acting now that she has a new sister? Is she wetting the bed? How much screen time is she allowed to have? How many books do you read together? I know that she is asking these questions to make sure that my kids are reaching their developmental milestones and behaving in age-appropriate ways, however, I find myself almost fibbing or making excuses often during this interrogation period.  Umm, how many vegetables did she eat? I think to myself for a minute. The real answer is ‘not a whole lot’ but I found myself saying what my pediatrician wanted to hear because I felt uncomfortable from the sideways glance I got after the last question I answered.  So this is what this has turned in to? I am lying to the doctor to make myself feel better and feel like I am not a terrible parent to my two children. With one question I even stuttered because I was so baffled on how to answer her honestly. The mom guilt is often too much for me to bear on a daily basis and now I have someone else making me feel like a piece of shit. Super.

After about three solid minutes of me answering questions that I was half listening to because I now am being given a physical by my four year old; I gave up. I know that I am a good parent.  Scratch that, a GREAT parent! I do everything for my two girls and sacrifice almost everything else that I need because those two small humans matter the most to me. I looked at our doctor and said, “You know what? This is hard.  All of this (as I point to my two kids) is hard.  Does Harper eat vegetables at every meal? No, she doesn’t. It’s not because I don’t want her to be healthy. It’s because I don’t want to have a fight about a pea or a carrot being on her plate just for once during a meal. Screen time? I used to be strict on screen time but now I am nursing and pumping around the clock for my one month old and then I need to wash all of those lovely parts so ya, she gets more screen time these days. How is she acting with her sister? Some days like a complete asshole to be honest. She thinks her sisters head is a fucking grape most days and wants to squeeze the life out of her like Agnes’ it’s so fluffy scene from Despicable Me. Other days she acts like the most amazing big sister you will ever see. It honestly is a crap shoot and I don’t know what will happen from minute to minute. At least I got them here to this doctors appointments to get their vaccines to make sure they are healthy.” She eased up a tiny bit after my crazy rant but not by much. I chalked it up to one of those moments of me agreeing to disagree before I started shouting ‘fed is best and it doesn’t matter if it’s by a boob or formula or a fucking chocolate bar’. Ease up!

So moms (and dads), let’s give ourselves a pat on the back, a break and perhaps a giant glass of wine because parenting small humans is real hard. Some days you will feel like you hit a grand slam and other days like you barely made it out of the dugout. And because every story needs a fabulous ending involving karma (or mine do anyway); my one month old pissed all over our pediatrician during her checkup. And just like that, justice was served! Now if you’d excuse me, I am going to go eat a chocolate bar because I deserve one!