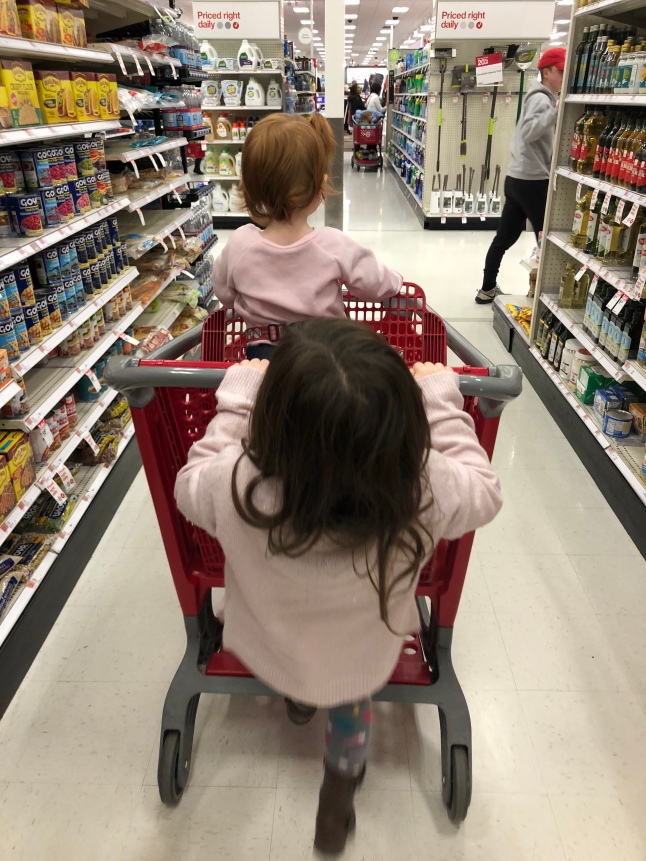 I was told the birthing process was the hardest. I remember when I was in labor with Harper, the nurse said I needed my sleep because I would be pushing for four hours like most new moms. Umm, excuse me? Say what? That wasn’t actually what I said to her. What I did say was, “you haven’t met me and there is no way in fuck I am pushing for that long.” She laughed. It was a laugh that said, I do this for a living and you know nothing. Whether or not that was true, at the very least, that is what her laugh seemed to say to me. With that being said, you never tell me what I can’t/won’t/shouldn’t do. It instantly becomes a challenge. I pushed for 30 minutes with Harper and for 29 minutes with Camryn. Four hours, my ass.

I was told nursing was the hardest. For both girls, they were naturals. I have been blessed to have nursed both babies until they were each 14 months old. I am not going to lie, nursing was certainly trying at times, especially when you never knew how much milk they were actually getting.

Then there was pumping. It took forever and not to mention, ALL.THE.DAMN.PARTS! Sanitize, steam, wash, rinse, repeat. Not in that order because I am pretty sure that I just said that backwards. Pumping sucked. Period. What sucked even more than pumping was mastitis. Between having mastitis a total of 5 times between both girls, was brutal. However, still not the hardest.

I was told the sleepless nights were the hardest. The kind of nights where you were up all hours nursing, diapering, nursing and more nursing to try and put that sweet baby on some type of schedule. I would walk around most days in an absolute blur while on maternity leave. The days turned to nights and the nights back into day and I wouldn’t have a clue of anything else going on. Scott would come home and ask what I did all day and I wouldn’t be able to respond. What did I do all day? Other than keeping the kid alive, I really haven’t a clue.

When Camryn came into the world I had already had a baby so I was a pro. I was in the been there and done that club. What I wasn’t at all prepared for was the insane mom guilt because I was always leaving one child to suffer. I couldn’t play with Harper while I was nursing Camryn. I wasn’t hyperfocused on Camryn like I was with Harper. The mom guilt was terrible and not to mention, mind numbing. In that moment it was really hard but still not the hardest.

I was told two was the hardest, no wait..or was that three? Or both? Two was tough but three?!? Oh, three was a trying time. That would be a nice way to put it. However, since it’s me that is writing this and I don’t sugar coat anything; it was a fucking disaster most days. Three sucked major, major ass. That was the first time I left my groceries in aisle Main Street (thanks Roche Bros for naming your aisles rather than sticking with numbers) with a mini screaming crazy person in a football hold. I thought about a head lock but that seemed like I would get more stares and glares than I already was getting. And by left the groceries, I mean I wasn’t able to buy food because of said mini screaming crazy person. This age tested my patience every single second of every single day. I was also pregnant with Cam and had such a terrible pregnancy where anything that could go wrong went wrong. But damn, being pregnant and dealing with an asshole threenager was the pits. Now being two full years out of that stage, it wasn’t the hardest.

Now that I have captured your attention, based on all of my infinite parenting wisdom, I will now tell you what the hardest part of motherhood is.

The hardest part is watching your children gain independence and needing you a little less. It is the most incredible thing but also the most gut-wrenching. When you are in the throws of it and doing everything for this little person I can remember the countless times I would say, “I can’t wait for her to be able to (insert whatever task it was). “Momma, I need this. Momma, I need that. Momma, can you open this? Momma, can you tie this? Momma, can you wipe this?” Until they start ‘getting this and getting that’ for themselves, it is actually so hard to sit back and watch these little people you have created become more and more independent.

The last week in August tested my limits of motherhood. My baby started kindergarten that Wednesday. On Thursday, I had to sing to my 1 year old while they put her under general anesthesia for ear tubes and on Friday, my baby who was now a kindergartener also turned 5. The week was such a cluster fuck of emotions, I can’t even begin to tell you. My heart felt like it was ripped out and stomped on multiple times that week.

Someone once told me that ‘the days are long and the years are short’ and I have repeated that saying countless times. It is so very true. I look at my 5 year old and 1 year old and wonder where the years went. I look at old photos and videos of my little chunky, curly-haired, sassy girl and want to hit rewind. I watch my stumbling redhead learning how to walk and think to myself, she was a baby just minutes ago.

So, for me, this is the hardest part of motherhood. I am just sitting here watching them become their own person right before my very eyes. How amazing is it watching them exist in this world and how terrifying at the same time? This is one of the many things that are out of my control and boy, do I hate it. I want my girls to continue with our morning and nightly snuggles. I want to bathe them and then smell their hair when we are done. I want to look into their little eyes and know they are still as innocent as the first day I held them in my arms. I want to giggle all of our cares away when I put them to bed while we talk about our day. I know that one day all of these things will start to fade. For now, all I can do is make sure that I have prepared my girls as best as I could for the world that lies ahead of them.

I do have to ask one thing though, what age should we be confident that they can properly wipe their own ass? I am still not at that age yet. Well, I guess she still needs me for something! Phew.